performed on February 16 of 2020 at Exploratorium Berlin 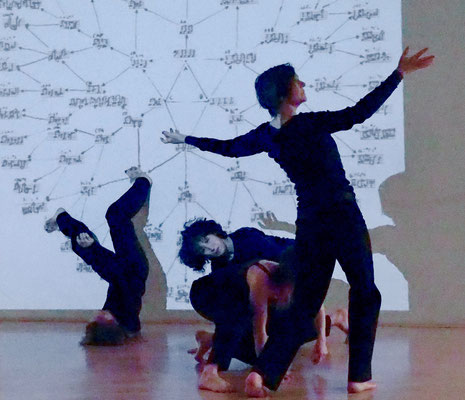 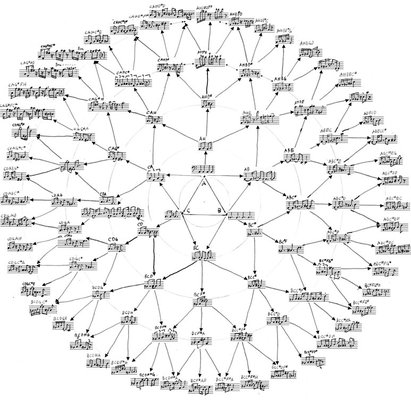 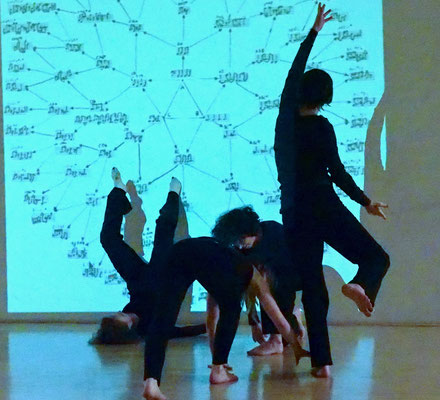 PERFORMANCEBÜHNE BERLIN based their performance on a score by Henry Mex. "Trifork" stands for three-way fork. The players moved from the central starting triangle ring by ring to the outside. The decision which of the three ways to the next ring he/she took, was made by the player for him/herself or by dice. The dancers unfolded their game along the theme of decision. 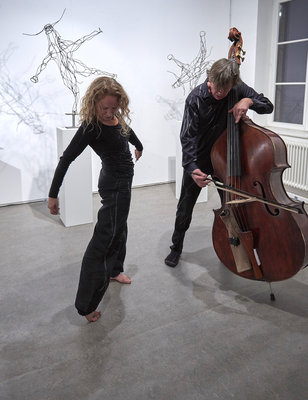 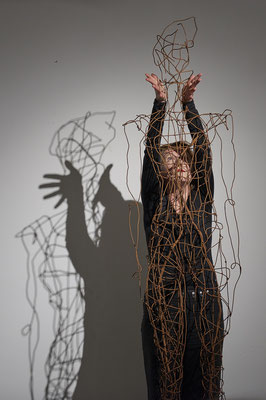 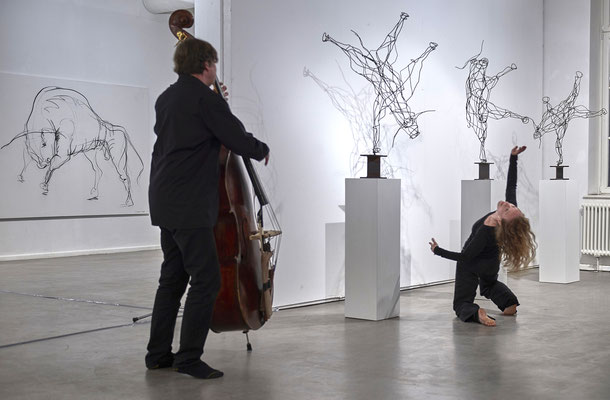 Our ancestors shaped us not only through what they exemplified and left behind, but also through what they kept silent or what was forgotten. Blank spaces leave behind a tension that everyone unconsciously feels. Children process events that they did not even experience themselves. We dream of things that happened to our parents.

The Slices ensemble developed the performance trans-parents in dialogue with Siegfried Kober's sculpture exhibition. Working in and with the exhibition space of Kunsthalle Brandenburg, we have been inspired by Kober's translucent lattice sculptures and begin a narrative. 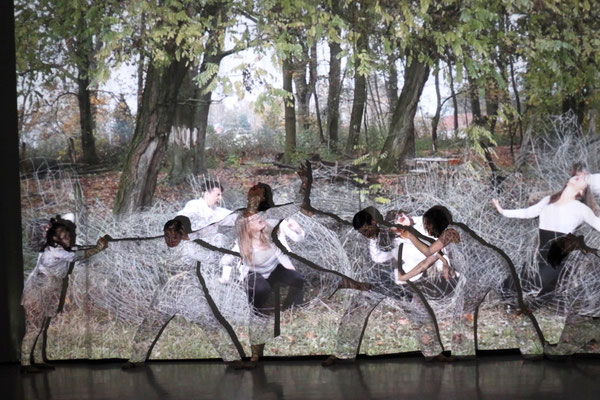 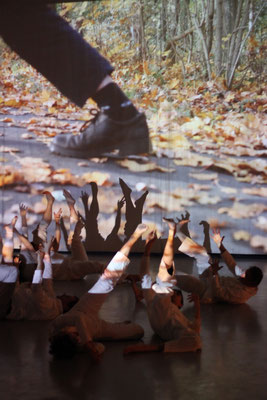 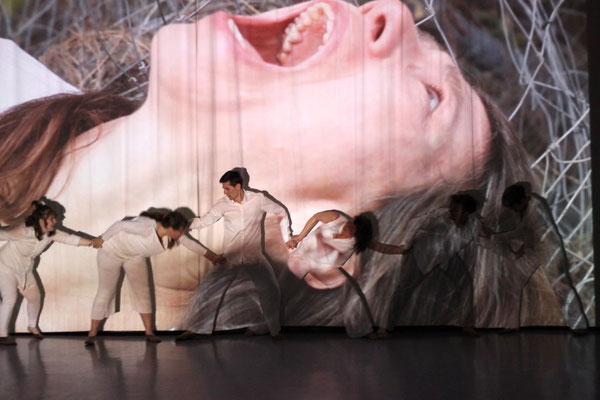 A dance experiment related to different perceptions: A sensual experience begun in the forest continues as a multifacetted dance and film performance on stage in the civilized space.

Initially it was the outside that sent movement impulses into the body, so that now the bodies will act from inside to outside - from the cellular memory. What is being transferred from the outside to the inside and back to the outside? What in the outer world resonates in us, inspires us? What do we take from the experience in nature into the civilization? When does civilization restrict us? When are we just wild creatures and are those visible in the civilized space?

The experimental process of mutual influence is reflected in the media's implementation: the experiences in nature come on stage as a film in addition to the live performance.

In the age of algorithms, trolls, fake news and news floods six performers and three musicians raise the question of how this stream of information touches us personally. What strategies do we use to keep afloat this flood? We can both go with the river’s flow and be aware of where the rocks are. 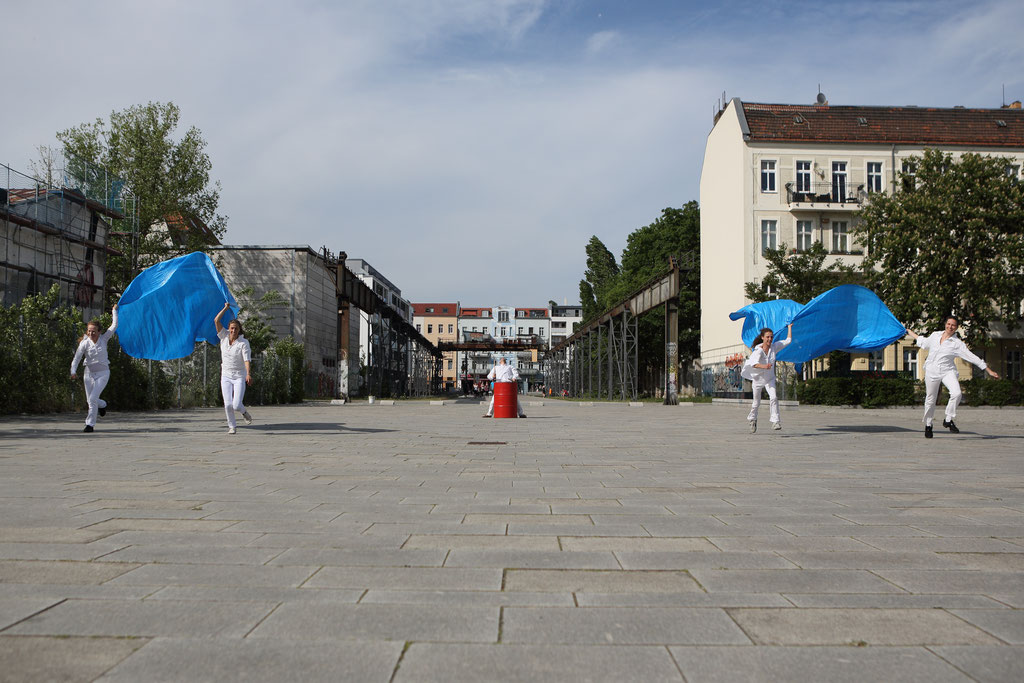 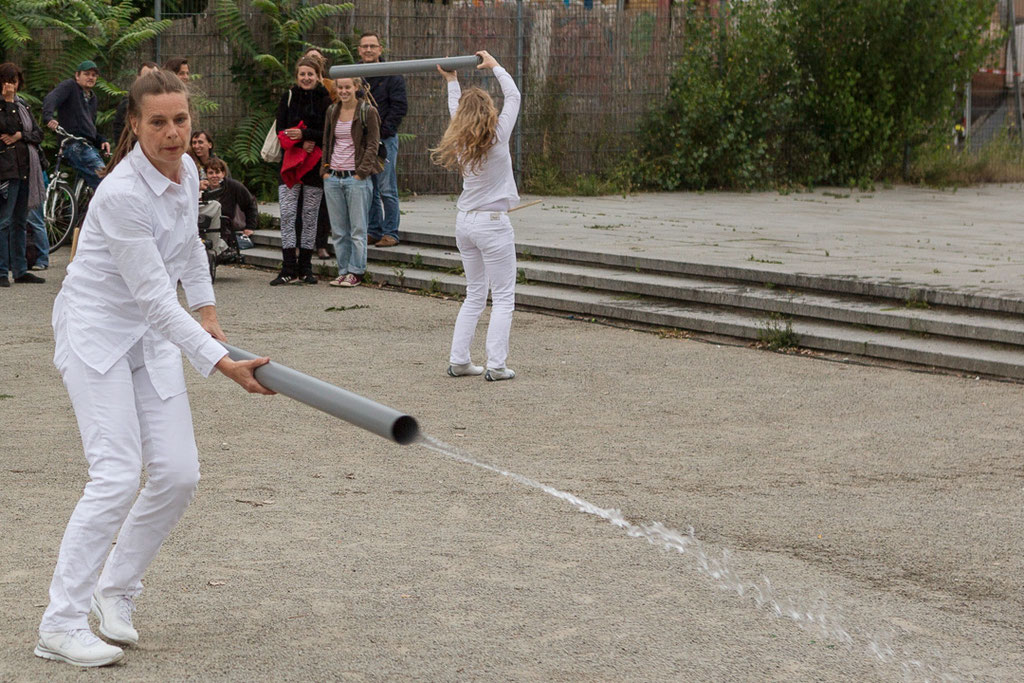 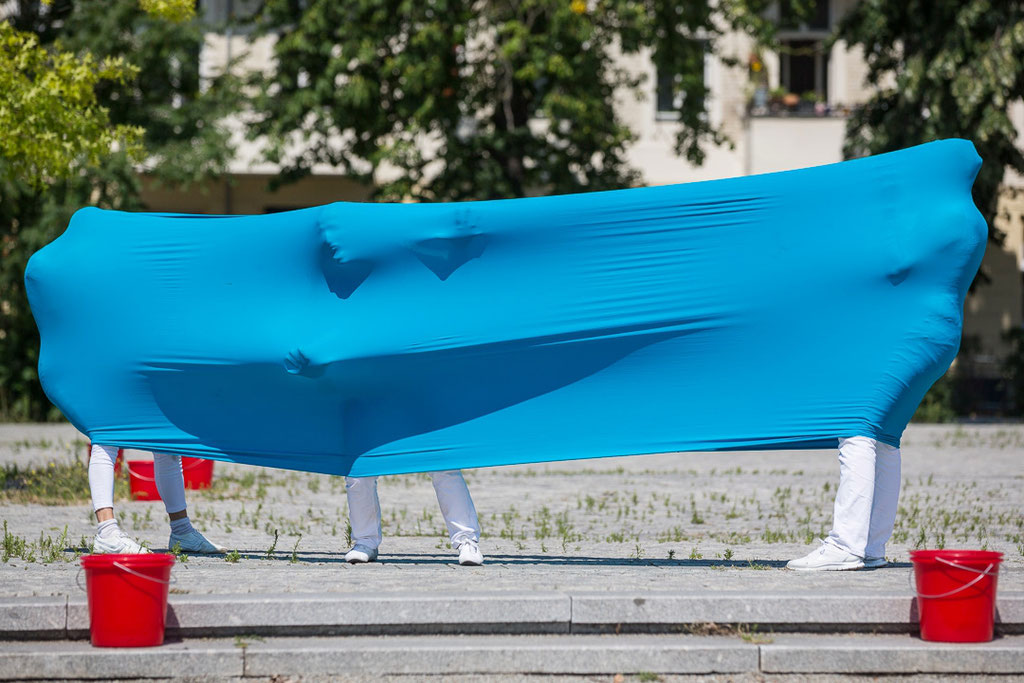 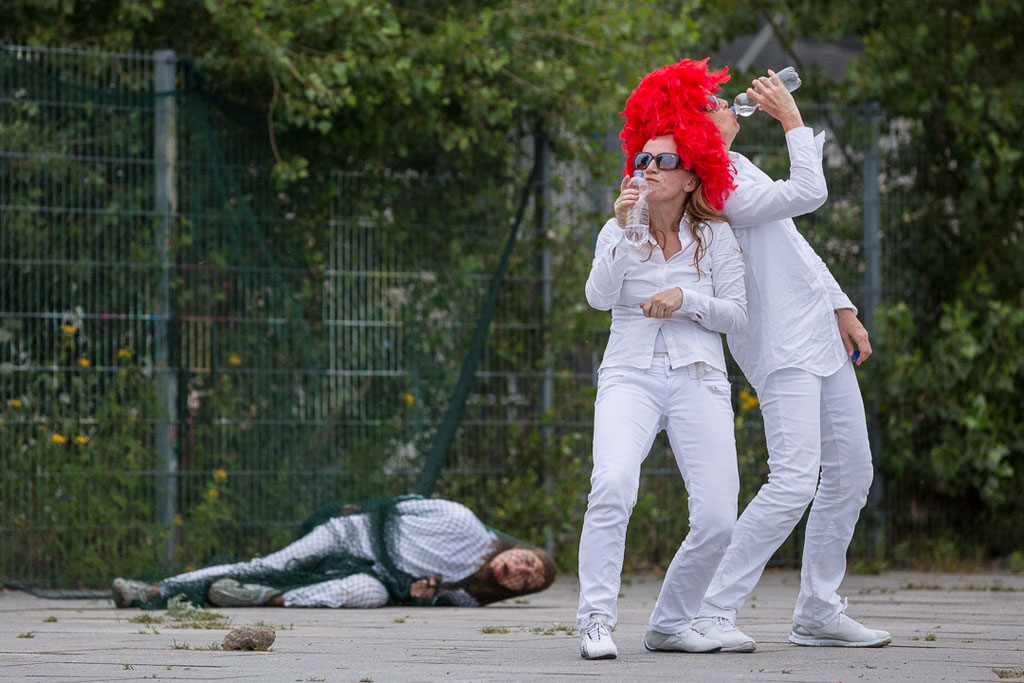 LIQUID SPACES II is a site-specific outdoor performance of dance and life music about water issues at Spreeknie/Platz am Kaisersteg in Berlin. This is a space between extremes with connotations of  industry as well as leisure and recreation.

Five dancers and two musicians deal with the tensions and conflicts inherent in that space and invite the audience to dive into a sensuous journey through different facets of the blue vital watery element.

What happens, if people, things, feelings, memories disappear? How is the emerging gap filled? Does vanishing always means something new will turn up?

„The fluid presence in our bodies is our fundamental environment: we are moving water brought to land“ (Emilie Conrad)

Without water there is no live. Water means movement of the smallest and biggest parts in the universe and vital parts in the body. The GWD Performance Group Berlin presented impressions of the actual research as a work in process of music and dance improvisation.


The performancebühne berlin is a changing group of artists from different genres that comes together to create sitespecific projects.

For VERORTUNGEN 1 five performers, two musicians and a writer dealt with the place emotions and ideas can inhibit and with the loss of spaces, with loosing one´s roots. This theme can´t be delt with the impressions of current refugee movements happening all over our planet. 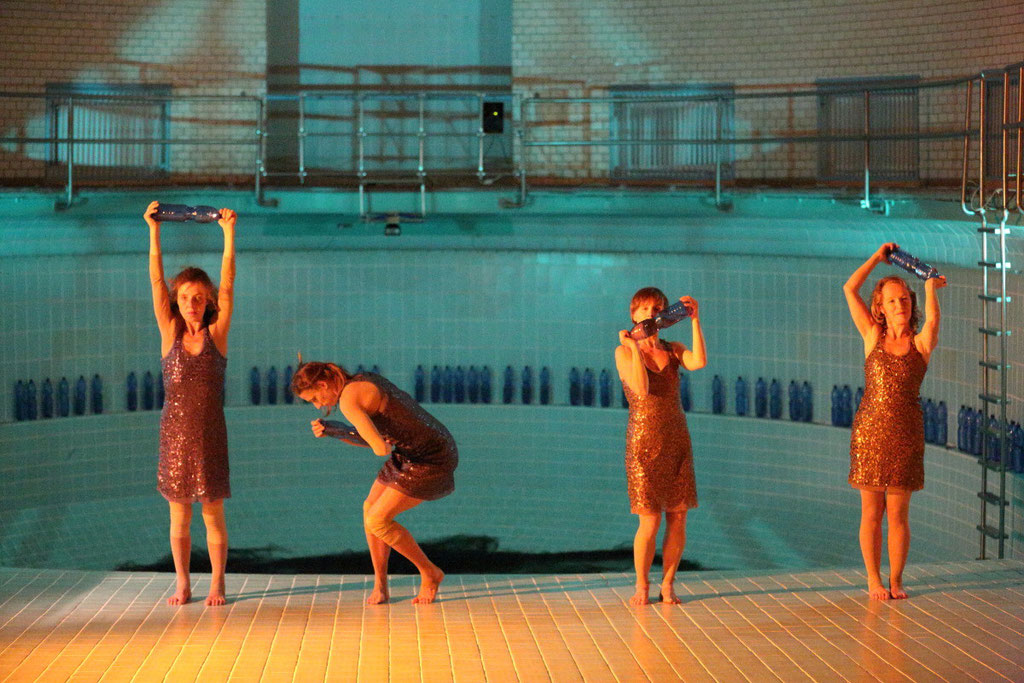 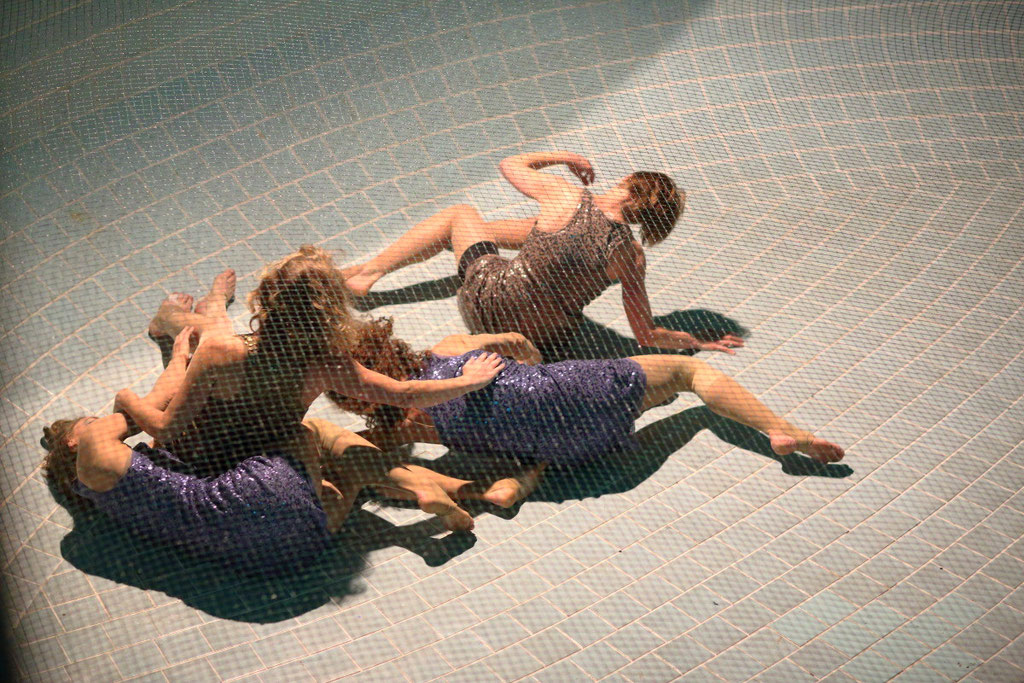 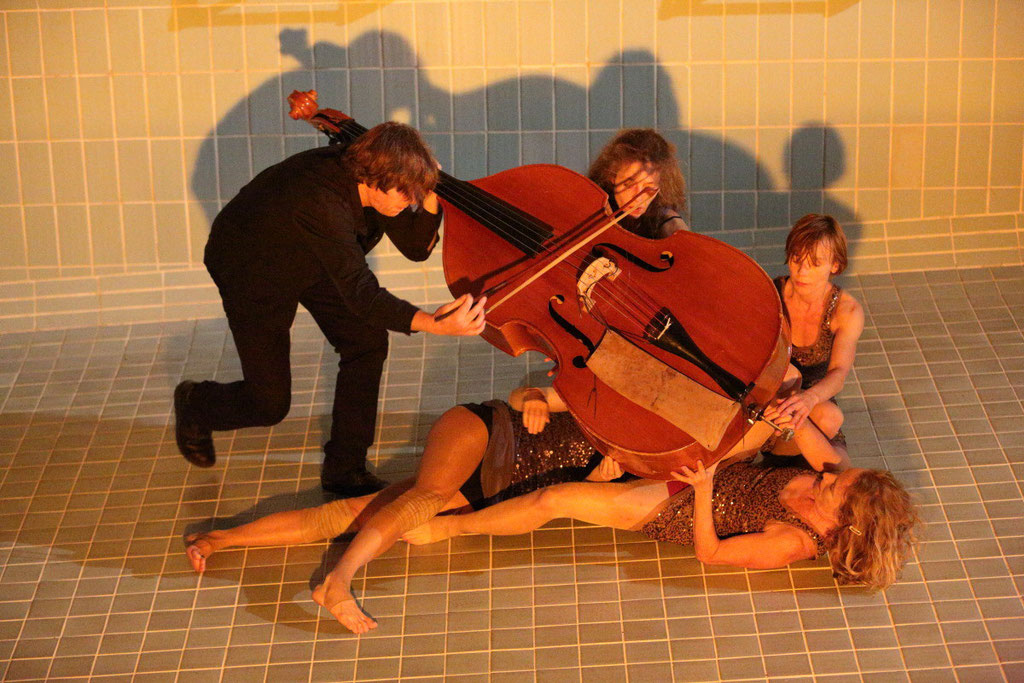 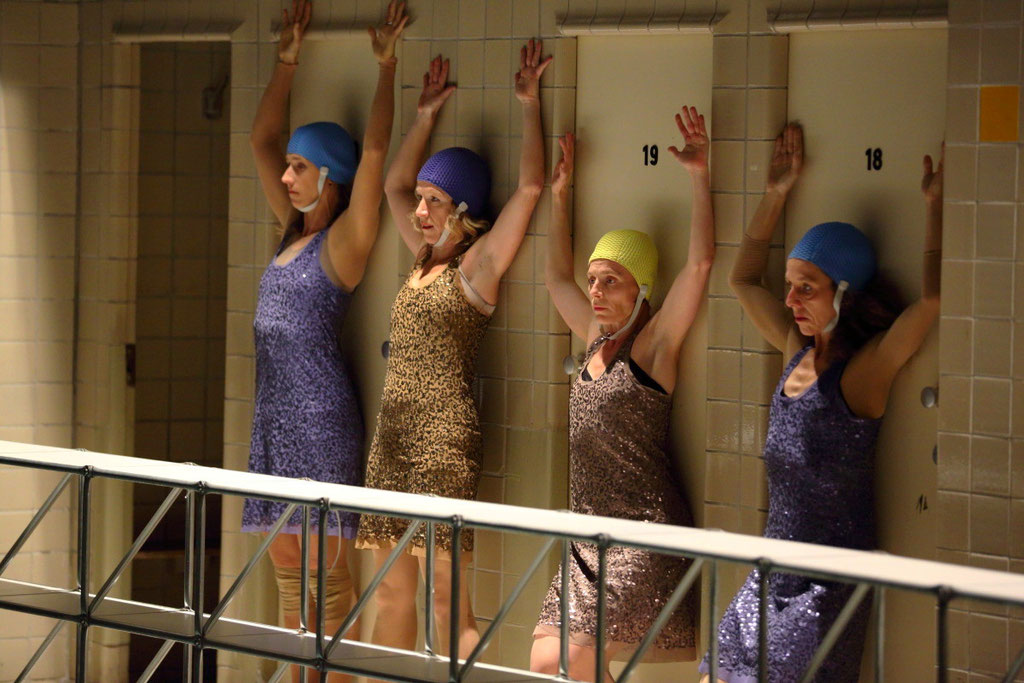 
The audience in CORPO LIQUIDO was carried off into a bodily circulation machine out of sound, movement and architecture, where inner and outer spaces were  in dialog like in a big fiction of the inside of a body.

Memories of the swimming bath were also present from the time, when it was still filled with water and people came in, got changed and enjoyed their time diving into the wide open world of the water. 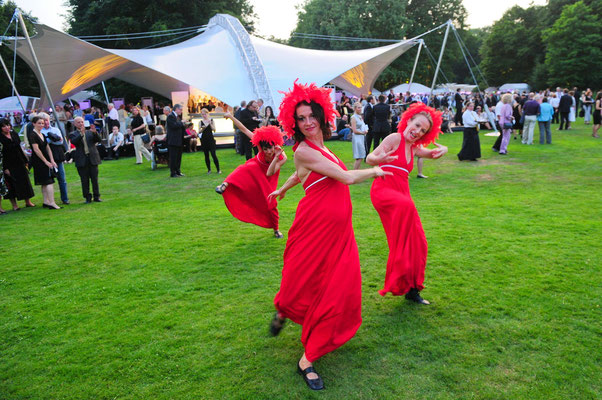 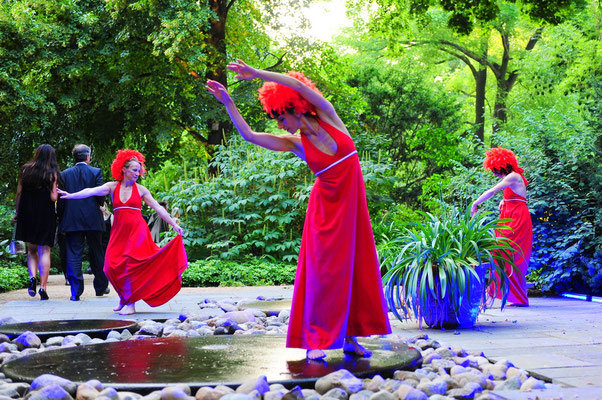 
A dance performance built out of moving sculptures leads the audience through the park from one spot to the other unveiling secret corners and romantic places of the beautiful Schloßpark.

You can discover hidden pathways and new perspectives, when the dance elicits the miracles from the different places. 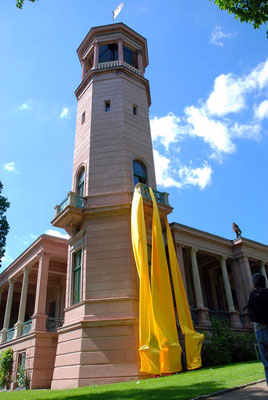 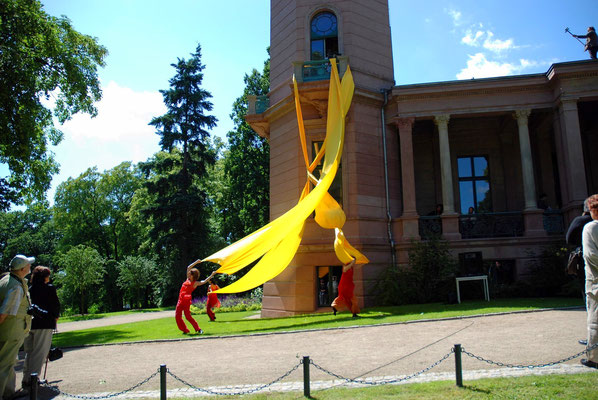 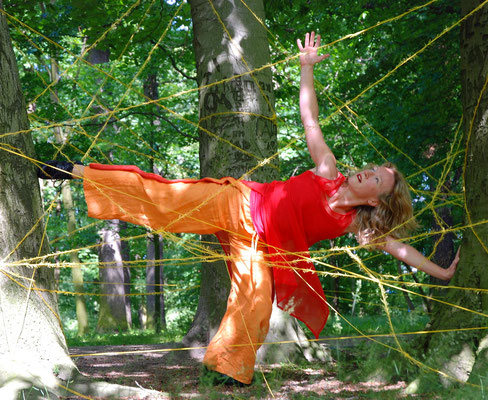 The performance focuses on the field between connecting, holding together and holding too tied, entangling. In our minds we put strings between the park and nine other places in Marzahn/Hellersdorf, combined them with different keynotes and sent on a journey between the places building melodies on the way and bringing them back to the park with echo. Streched out fabric, strings and ropes completed the stage outdoors and gave borders and friction.

The premier of geomusik Biesdorf was part of the music as well as a revival of “steps in park” for trumpets and trombones. The tones metaphorically were the pathways in the park also with a correlation of nine places there with the keynotes. Out of the length of the dance steps on the pathways the composer extracted the length of tones and a playful combination of instruments. 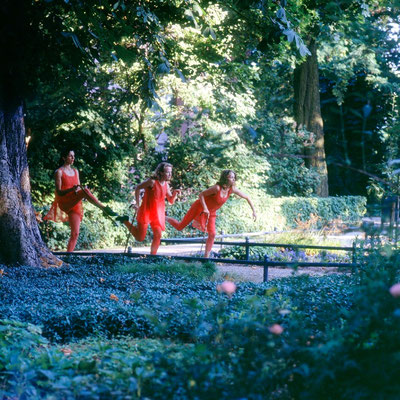 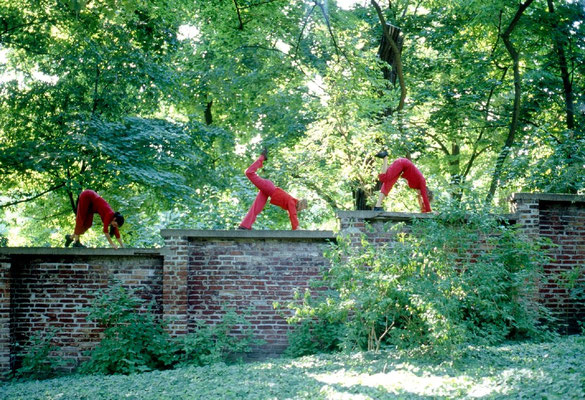 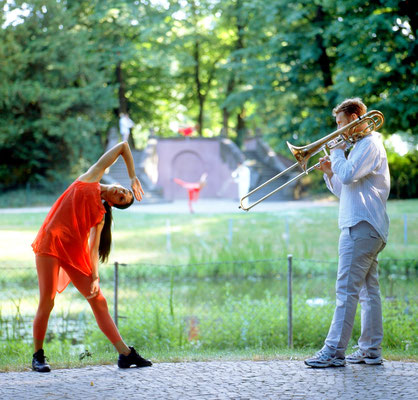 The site-specific production offers new perceptions of the park-architacture created by Albert Brodersen for the visitor of the area. Three dancers “wandered” through the park and asked the audience to join them. Four musicians drew sound-geometries between seven places and the dancers and the audience. Time, Movement and steps structured the different paces of the music. 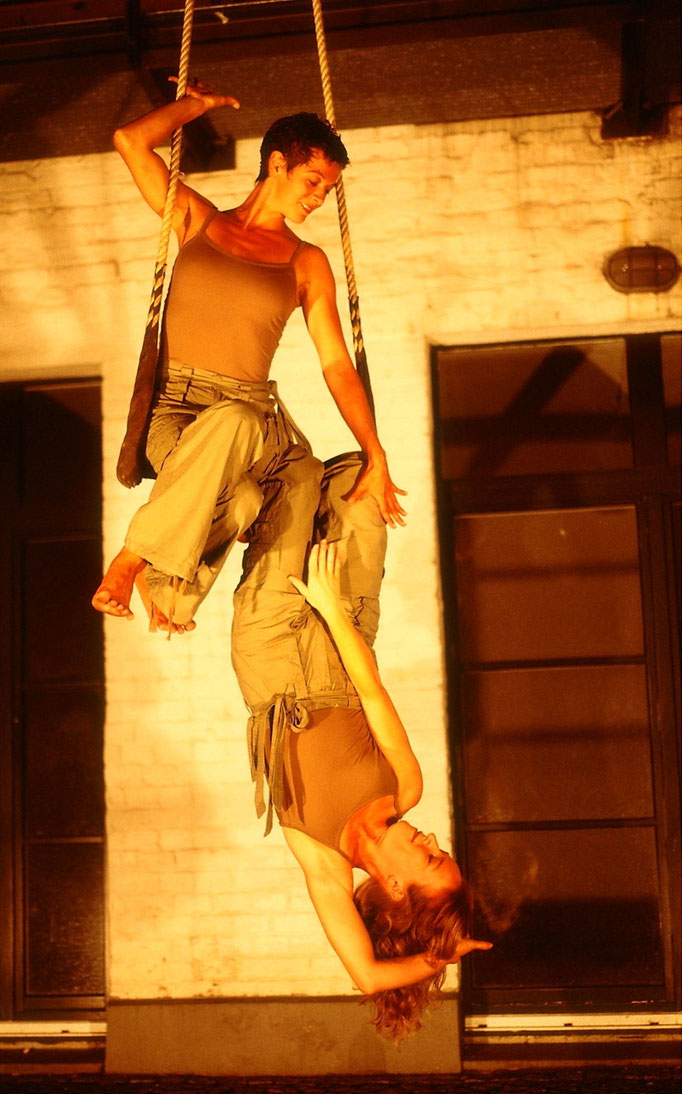 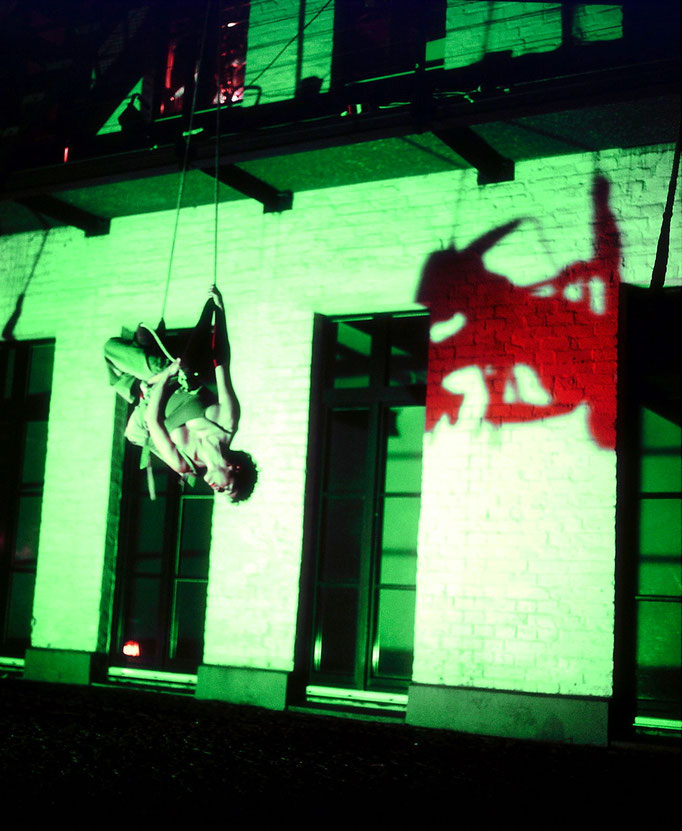 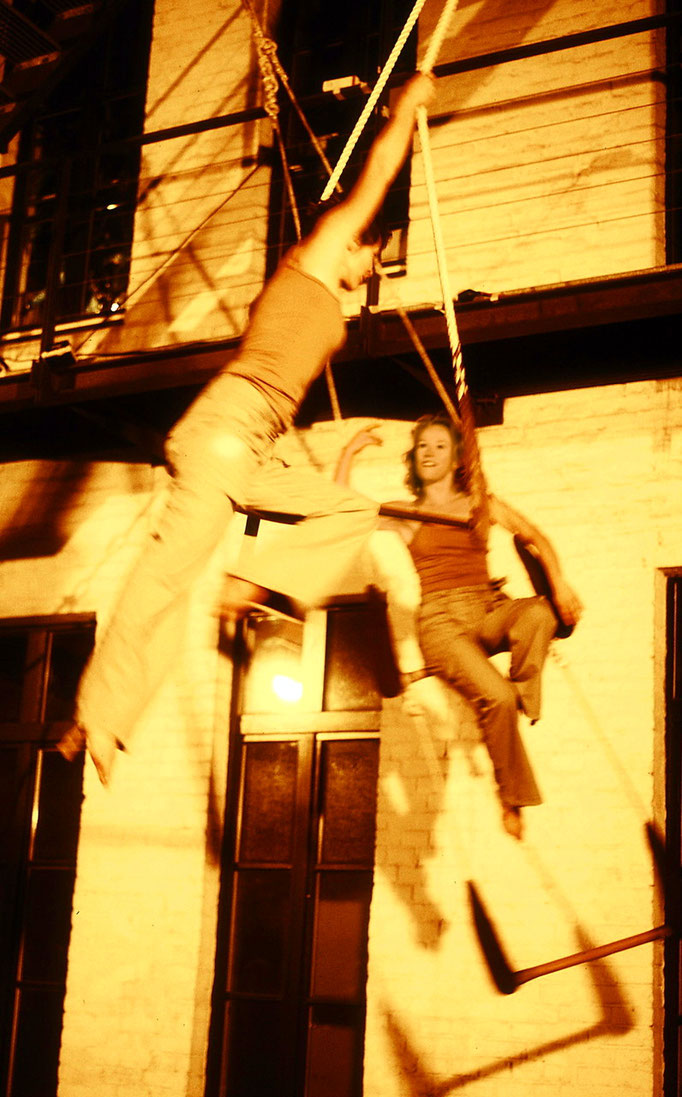 The character of the piece is that of dialog between the artistic voices of the three performers. The trio works with direct presentation form without distance to the audience. The special performance places play an active role in building the story.

Through placing the trapezes, loud speaker systems and the audience there is a freshness and directness for all sides.